This is my second Davrian. I bought the first, a 1970 mk4, back in 1980, then bought this one really for its engine, Jack Knight gearbox and other spares. In fact the car itself is a gem, it's a very rare road registered Mk 7.....most were built for competition and never registered, which I believe makes them impossible to road register now?

Anyway....this car is seriously lightweight. I put it on a weighbridge about 50 yards from our front door, and it weighed around 400kg, without the engine and gearbox. As the engine weighs 60kg, and the box about 25, that makes it 485kg. It would need a rollover bar for competition these days, but it could easily lose 8kg just by swapping the Girling Type 14 pig-iron calipers for alloy ones. Modsports bodywork would also lose a few, (not many) kg.

The car has RAC passport and has won several Scottish Speed/hillclimb series back in the late 90s/2000 in the hands of the last owner, Paul Dick.

Paul was a big guy, tall and solid, and how he managed to get into the car amazes me. I have a Scottish buddy here who tried it and almost had to be winched out, and he's comparatively small and svelte....

The car has sat in our barn since 2001, robbed of its engine and box, but I've just started collecting bits for its full restoration and return to glory.

Don't blame me for the paintjob, remember it was a hillclimb car....they seem to often be rather 'eye catching'! It will definitely be changing colour, and having a double-bubble roof fitted.

I'm building it as a road car which will do trackdays, and which with a change of engine, box, and possibly calipers, can be entered in the fabulous city-centre road race, the Circuit des Rempartes d'Angouleme, which is about 45 minutes from us in SW France. 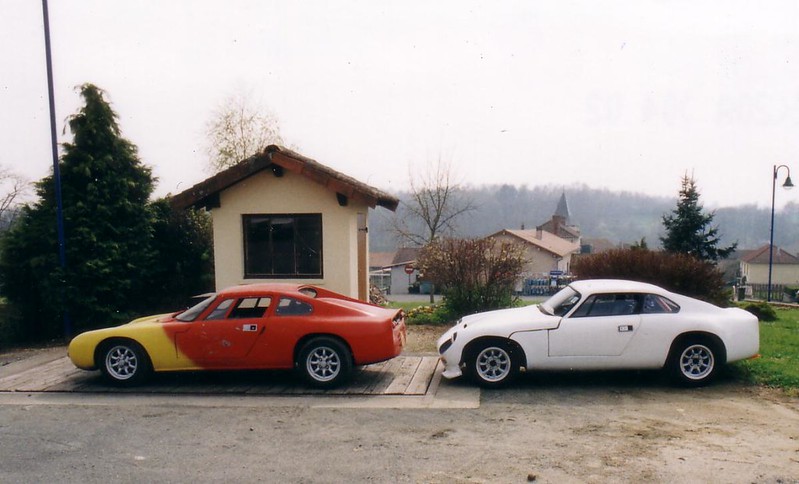 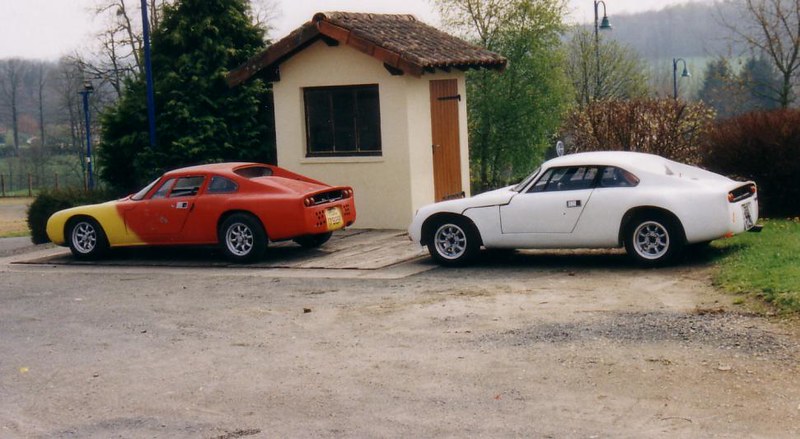 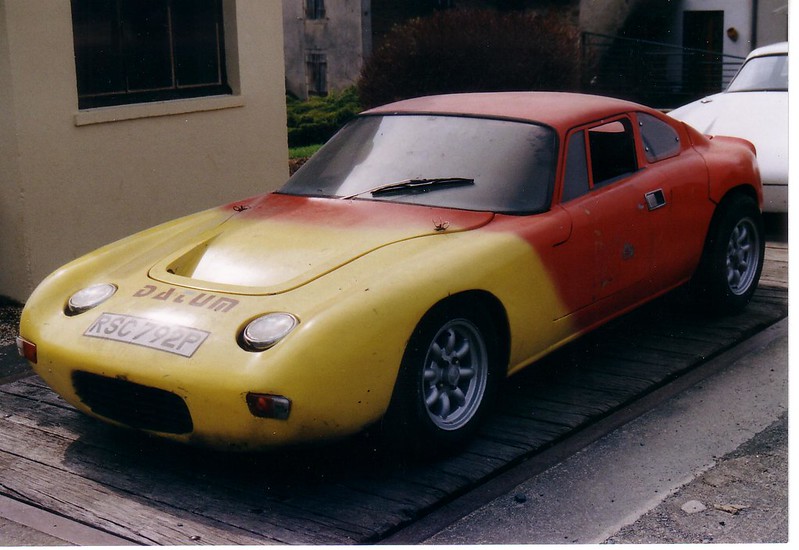 Since the weigh-in in 2001, it's sat in our barn waiting for me to pay it some attention. 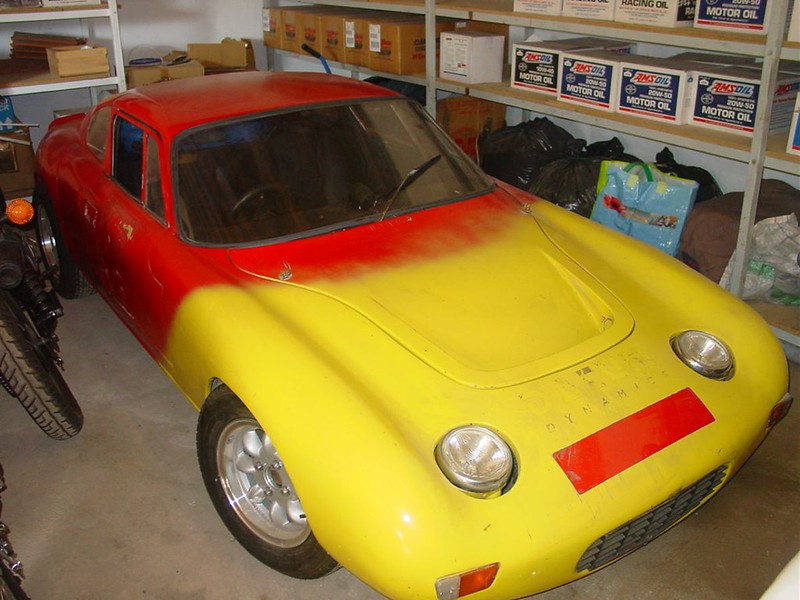 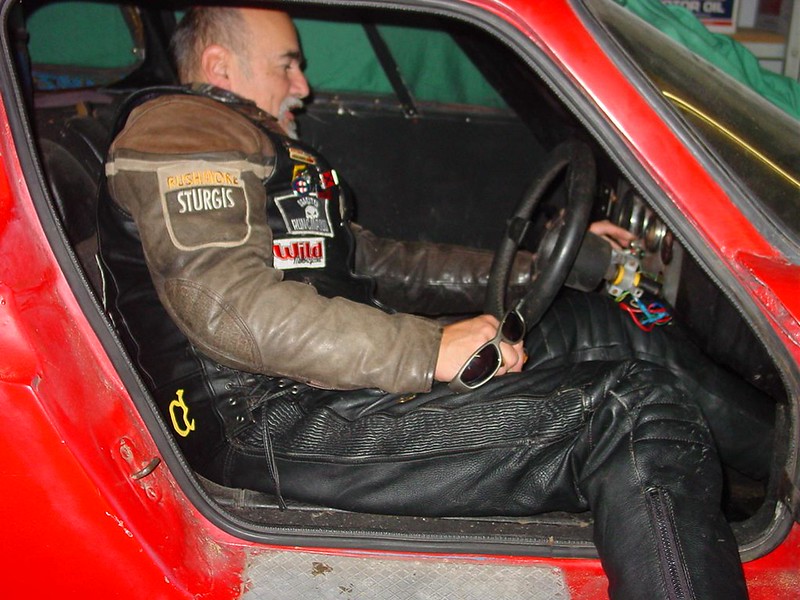 I am in a bit of a mess here, as I can't see how I'm going to insert an FIA approved rollbar in this car with the rear window designed the way it is. The window blocks fitting a system using the normal diagonal to rear brace leg design.

I'm discussing it with Tim Duffee, if it's possible, I'd fit something like the Lotus Elise FIA arrangement which uses a bolt in brace for the vertical hoop and a bolt in removable diagonal forward facing strut to the passenger footwell. 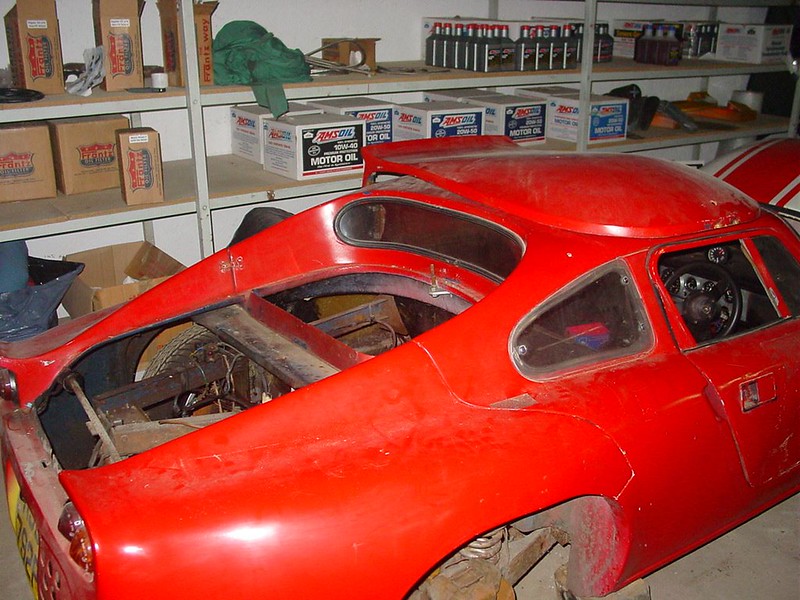 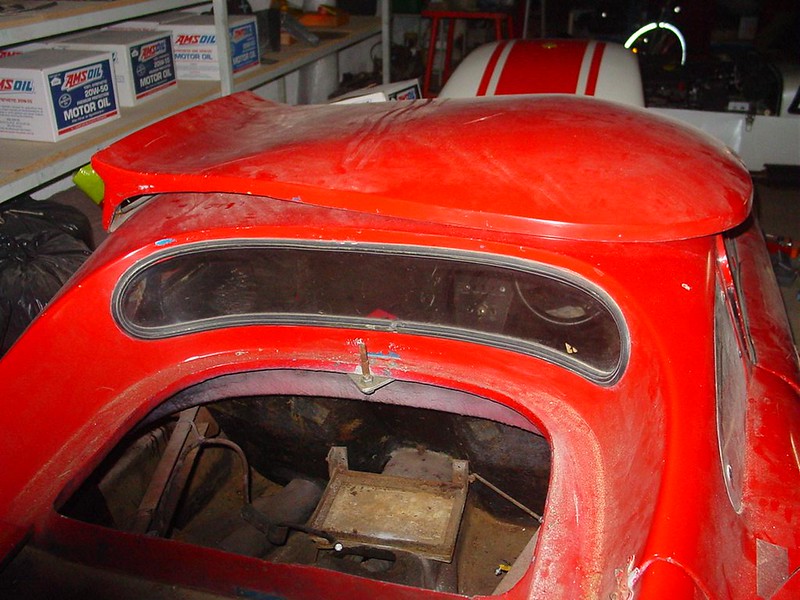 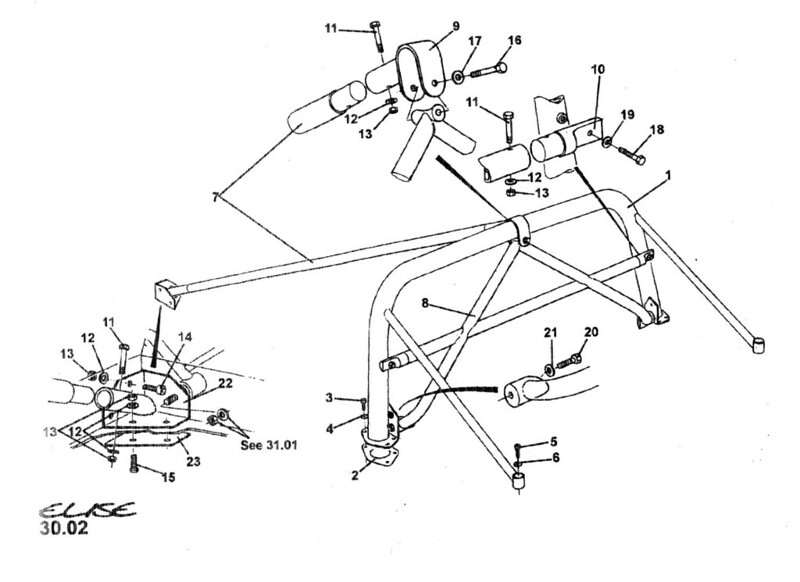 Nice cars
I know Imp engines can be oil burners but you seem a bit over stocked in that garage of yours! Hard to get in France is it!
Top

I have been known to sell it... in fact I import it. Some stock lives in with the cars.

If you believe the results of comparative testing, using the figures from the approval tests for JASO SAE and the other ratings, this stuff is better than the others.

Amsoil were the first to launch an API approved fully synthetic oil on the US market in 1972, a year before Mobil 1 appeared, and have always striven to produce the best oil possible, not the cheapest to make.
Top

Hal, this cars in Italy, has a full cage fitted.
Top

That's one solution. I spoke with Tim and it's rather heavy, and if they fit it, £2000 as the roof needs cutting off.

Tim reckons for hillclimb, slalom and some other historic stuff the old FIA vertical hoop, rear bracing legs and diagonal in the main hoop is accepted, and a removable Petty strut from the centre of the main hoop to the passenger footwell can be used.

He says this can be fitted without even slotting the bulkhead, though I can't see how!

Stakhanovite, do you know what sort of cage/bar is stipulated for Historic 70s cars at Angouleme?
Top

I know several people have fitted electric raising headlamps on these Mk 6 and 7 Davrians, so I will be doing the same, as the current cable operated arrangement doesn't look at all solid....I'm sure the lights would be bouncing around all over the place.

I'm impressed by the huge space for the spare wheel though, on the Mk 4 there isn't really enough room for one. That's an 8" rim in there. 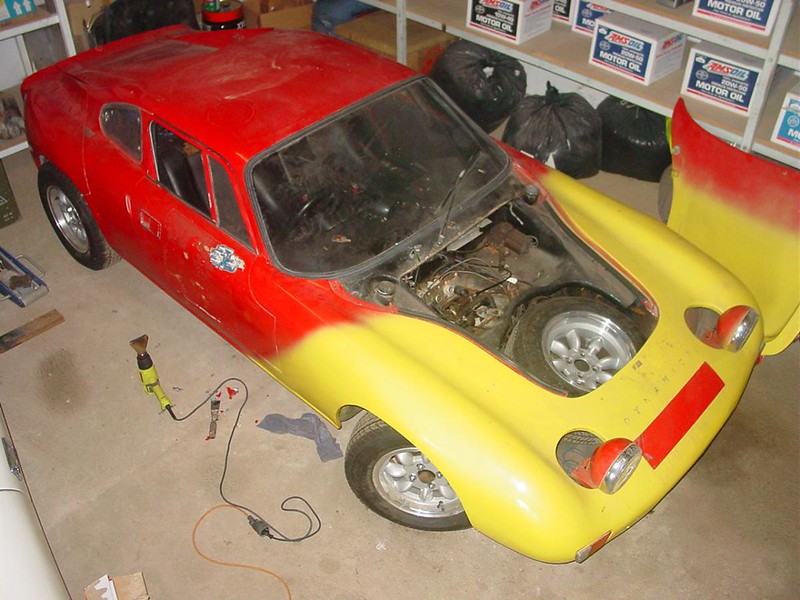 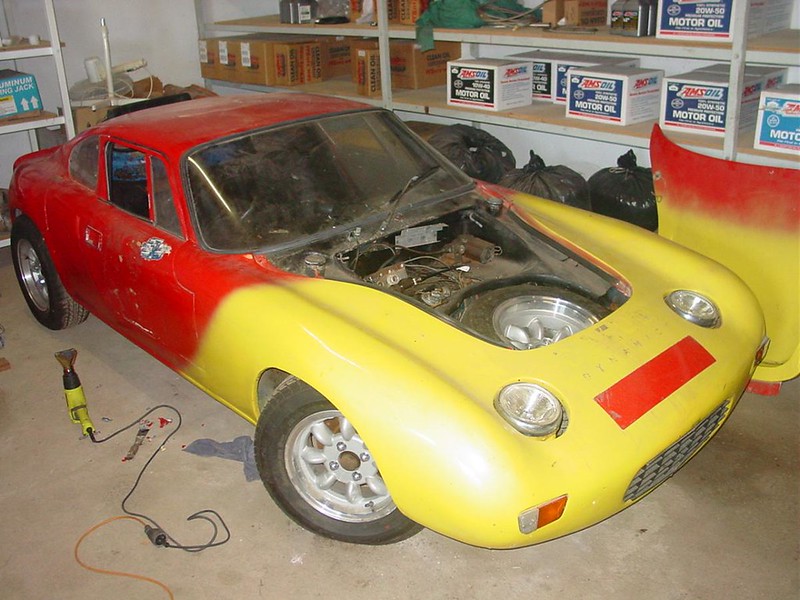 Not sure how this shut line became as it is....has the upper bit been added to? Will be rectified before repainting. 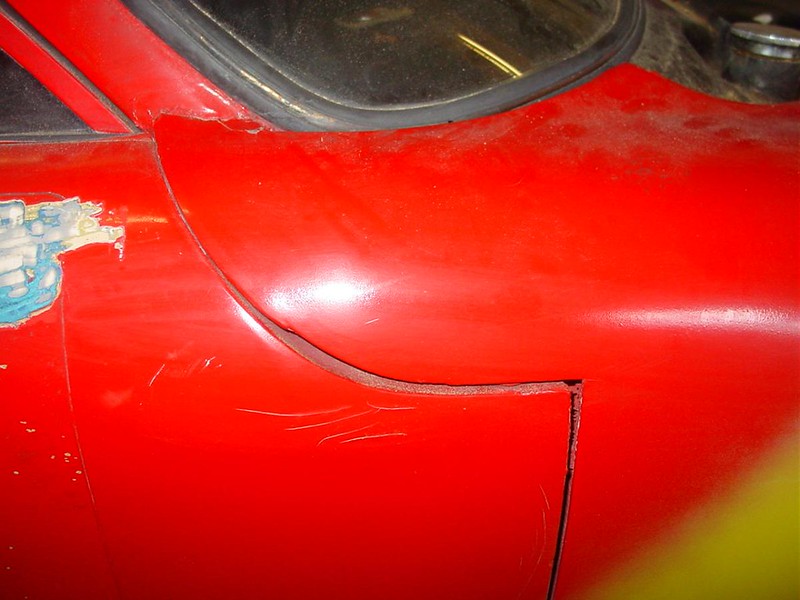 Someone has gone a bit berserk with the bodyfiller.... 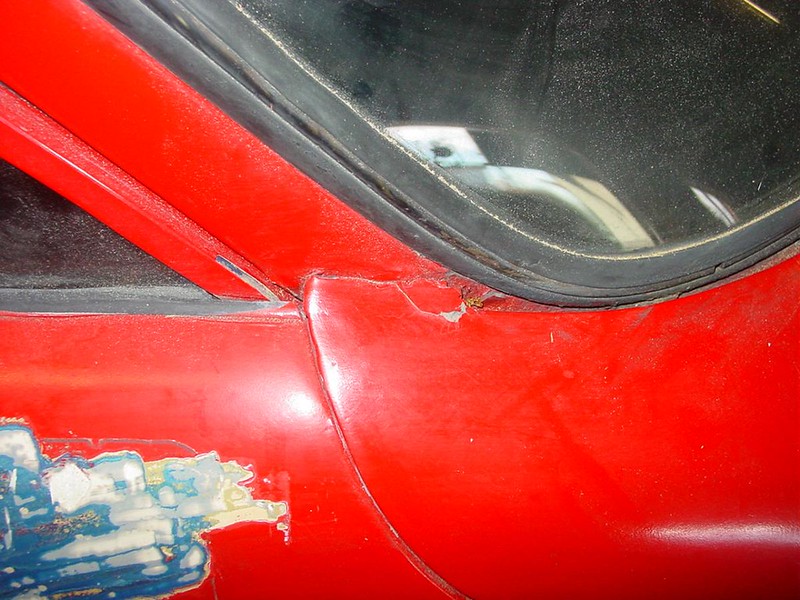 Testing the hot-air gun method of paint removal.....I think it's too easy to remove gelcoat, but will try on a lower setting.... 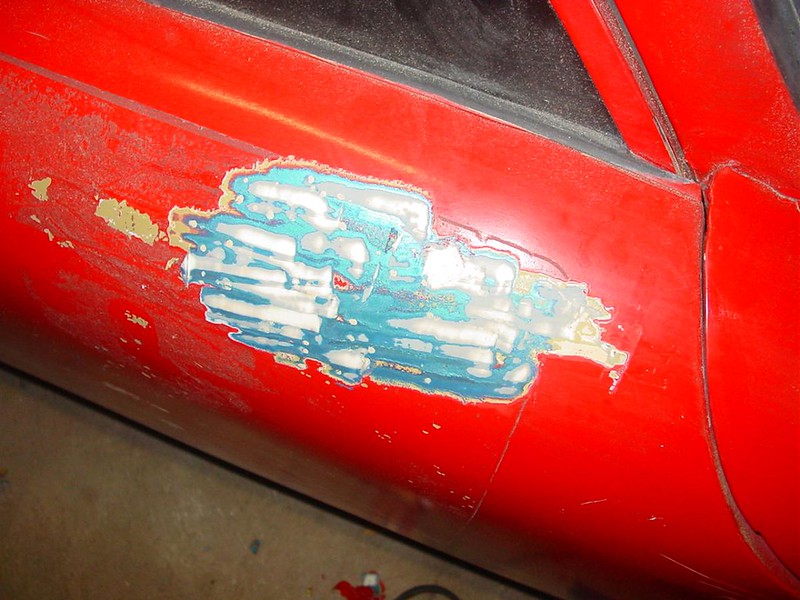 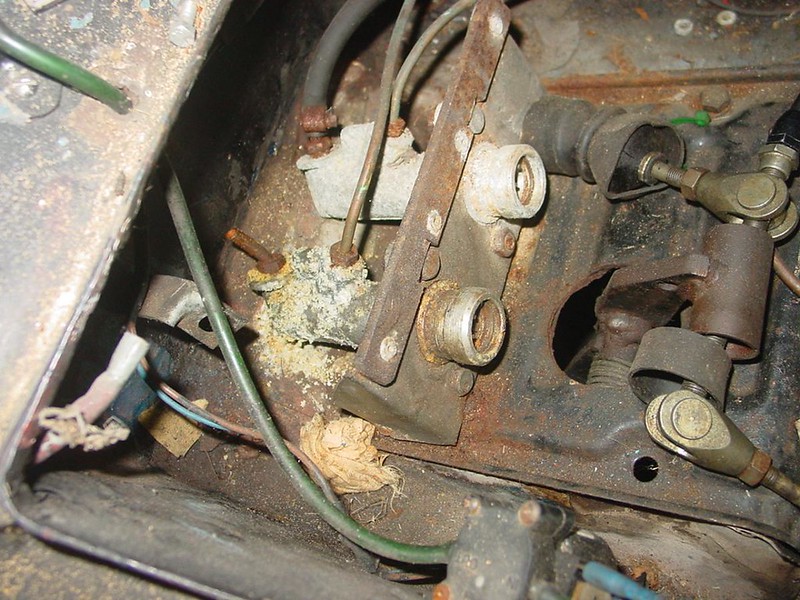 Hal, re Angouleme, looking at what was running there this year, fairly basic roll bars are acceptable to the organisers, might be worth looking at the Legendary Circuits race, organised by Pieter Bakker, for more info.
Top

Sounds good, I really don't fancy fitting a cage. I reckon it'd be rather strange to demand full modern spec cages when they continue to allow Historic Formula cars with just a small head protection bar.....certainly back in 2002 I raced in historic with just a rear FIA bar.
Top

Hi Hal- check this out

Nicely prepared car. I doubt I could fit a similar cage without removing the roof on mine though.

I think Tim is going to be trying a non roof off option though as it's on a Mini engined Mk 7, it's not at all the same at the rear, behind the seat bulkhead... so even if it can be done by inserting the cage via the rear, it's probably not possible with mine as I still have a boot instead of an engine bay as on the mini engined cars.

If the FIA accepted the front part made as separate bolt together bits it would be a lot simpler.
Top

I knew Paul Dick and this car very well.

In the early 90's he thought nothing of entering the car in the Culzean Classic Car show one w/e, then would be competing with it the next !

In the early 90's he thought nothing of entering the car in the Culzean Classic Car show one w/e, then would be competing with it the next !

I only met Paul the once, when we collected the car in the middle of a blizzard in Feb 2001. He told us the car had won a speed hillclimb trophy series, not sure what year it was though.

He had just discovered someone had stolen a lot of the wheels for the car, so it only had the Revolutions and hand cut Avon race slicks that were on it.

I was just amazed that anyone Paul's stature could even get in the thing, let alone drive it so successfully.....I recall him being like a Scots Obelix....well over 6' and solidly built (not fat)....like a full-back.

My head touches the roof easily, with a helmet, so the car will be getting the double bubble roof treatment before I repaint it in the spring.

Alan, when Paul entered the car in the Culzean show, was it all red, or did it have the front painted yellow as it is now?