ImpManiac wrote:Bring your Imp on the run. Then you can offer me a lift!

If you are stuck I will be needing a navigator

There is most often someone with an empty passenger seat but I would love to take a ride in your lovely Chamois that I have so long admired.

See you Friday, if not before.

For those who don't look at Facebook, it has been reported that the B2086 Swattenden Lane, to the west of Benenden (i.e. west of Hole Park) is closed due to road works, replacing pipes. The following update was posted earlier by Malcolm Voss, I hope he doesn't mind me copying this here for the benefit of anyone travelling to the National and approaching from that side....

I have just checked on the progress of these works and the road is still very much closed not far from its western (Cranbrook) end. It is supposed to end on Friday but I am doubtful judging by the amount left to do. The diversion is a little lengthy but if you don't know the area I suggest that you follow it, BUT there are two warnings I would make.

1. The diversion takes you through Hawkhurst, then Sandhurst (30 mph and a favourite spot for mobile speed camera van) then left onto the A28 towards Tenterden. The diversion then turns left in Rolvenden back onto the B2086 and you will find Hole park on your right after a short while. Tonight this last sign tonight was completely obscured by parked cars and if you miss it, you immediately find diversion signs for ANOTHER diversion which will take you down to Rye!!!! Make sure you turn left in Rolvenden opposite the little motor museum.

2. If your route approaches the B2086 (Cranbrook end) on your right, you will see that the diversion requires you to turn around. If you have a trailer and you do not find it easy to U-turn, continue past the closed road to Cranbrook where you can either follow another route or you can do a simple U-turn at the roundabout and retrace your steps to the official diversion.
---------------------------
John Hall
Top

For those coming from North of London, an alternative...

Take the M20 to Maidstone and pick up the Headcorn Road instead of taking the A229 down to Cranbrook. This is a meandering route through the Weald of Kent so its rather pleasant - it passes through Headcorn, Biddenden (superb Cider from there), take the road to Benenden and then turn left toward Rolvenden when you get to the village of Benenden. This will be easier/shorter than taking the official diversion.

That is helpful information. Thank you, guys!

Regardless of what road(s) you're travelling to and from Rolvenden I wish all of you a safe trip and a superb National 2017.
Overseas contact, Sweden. -69 Cali (998), 2 -64 Imps in need of "some" work.
Life is full of solutions waiting to be found.
Top

I wish everyone attending a safe journey too.

Best wishes to you, Lars, for a speedy and complete recovery from your illness.

Relaxing at home after another National. Very chilled out vibe this year, similar in feel to Bridgwater. I had one concern upon arrival but in practice it proved to be no real problem for me. Unfortunately, along with a few others, I suffered with an upset stomach for most of Saturday but I still managed to enjoy a relaxing weekend.

Great to see old friends and really good to see a lot of new faces who will hopefully attend future events no matter where they are held. If Bryan Bayliss can come over from NZ then the "it's too far" argument is very weak!

Didn't get to spend much time with the Dutch Imp Racing Team this time but will make up for that at Going Dutch in May. Had I brought LNK this year I would probably have won 3rd in the Sport class as there were only 2!

Big thanks to Rich and Karen for bringing a box of elecktrickery for me to keep my food cool and my phone charged.

Rej didn't win best Rootes non-Imp but at least he was beaten by a worthy and gorgeous Sunbeam Rapier (although some fool at the factory put the steering wheel on the wrong side!)

Hope everyone had/has a safe journey home and if you suffered over the weekend may all your items for sitting on be forever firm!

Yes a great national a lot of new members there and a lot of missing you were all missed by me , Big thanks to all involved ,oh and baz i was never in father ted

Just got back from national. What a great weekend. Well done to Colin Foster, Gill Foster, Karen Fitzgerald, Pete Fitzgerald and everyone else for putting the whole thing together. See you at Cropredy Colin and Gill.

Also, while I was busy with taking John Shepard around the winners of the classes for the Rosemary Smith trophy, a lady asked me a question about presenting awards at future nationals. I planned on going back to her but with everything that was happening I missed her. If she reads this, I am very sorry. I wasn't intentionally ignoring you I was just rushing around. Please contact me through my details in the magazine.
James Henderson.
Top

Another great national. Well done and thank you to all those involved.
It was a lovely setting and the format seemed to work well. Can't wait for next year!

Wonderful relaxed weekend in Kent. Big thank you to all who made it possible and all who made the event so enjoyable. As always, too many people to talk to and not enough time.
Top

Huge thanks to Colin, Gill and all the organising team for a fabulous National. A National organiser's task, while never thankless, is often beset with behind-the-scenes problems and hassles and I know this one was no exception so heartfelt appreciation to you all.

As Simon has already said, too many people to talk to and not enough time. It was great to meet up with Brian Baylis and his wife Cheryl again. My partner Angela, being a Kiwi, had been very keen to meet them. For me, it was great to meet up with Davrian owner John Daniels who I had not seen since 1981 when he welded the rear turrets and rear floor to get my '73 Super to get it through its MoT! The car was only eight years old which says a lot about later Imps' build quality or lack of!

My favourite car? Always a tricky one. Andrew Webb's gorgeous fastback Rapier was the car I would have most liked to drive home while, of the Imps, the stunning AA Imp Van stood out as being, well, stunning!

We appreciated having a wide choice of runs that could be done in our own time as an alternative to convoy runs. Convoys are spectacular of course but, from talking to other members, can sometimes be a bit stressful due to the speed being a tad higher than some participants feel comfortable with. Personally, I'm fine with convoys but it was nice to choose our own day and time to do a run so Angela and I enjoyed a pleasant drive to the Romney, Hythe and Dymchurch Railway on the Saturday and boarded an open-sided carriage in scorching sunshine. No sooner had the train left Dungeness station the heavens opened to the accompaniment of strong winds! We passed our little dog, Brody, back and forth to each other as he made a great hot water bottle! Incidentally, this was Brody's first visit to a National and he loved meeting everyone!

Another Thanks for a great weekend. Great to catch up with friends old and new already looking forward to next years, hopefully won't be such a mad rush to get a car ready although I'm getting pressurised to have Karen's Sport done.

Great weekend with great weather , thanks to all involved in sorting it out and organising it .
Still stunned the Vusky got a 1st in the Van and Husky class especially given the quality of them all - esp. the AA van .

Big thanks to ALL the team who put this year's National together - Ben, Vickie and I had a great time.

We really appreciated the laid back atmosphere and the idea of suggested destinations rather than the formally organised runs. The barn dance was appreciated by Ben - he loved it. As did the bar staff who seemed to be dancing each time I looked over there - although I think it may have been a little more tongue in cheek.

I didn't manage to catch up with everybody I wanted to - time ran away, so apologies to anyone that I neglected!

And thanks to everyone who bought the book!

THANK YOU too all of the organisers and all those involved in any way in running the Imp Club national meet 2017 event.

I too had a wonderful time!

As has been mentioned, the balance between organised events like runs out, cinema showings and the cake competition and unstructured time to explore the gorgeous surroundings or just relax with friends was just about perfect, in my humble opinion.

The overall effect was to create a most relaxing experience.

Hole Country Park was a lovely place to hold the event.

The campsite had variety and character in abundance. I did not personally notice any issues with the smooth running of the event.

My Imping batteries have been recharged.

Just like to add my thanks to the organisers and volunteers for this years National, enjoyed the relaxed atmosphere and the autotest was great to watch. And to top it off the Imp ran faultlessly and even achieved a 2nd in the Young Member class which was a surprise, (thanks to everyone who voted for it

) Here's a couple of photos with more on Flickr 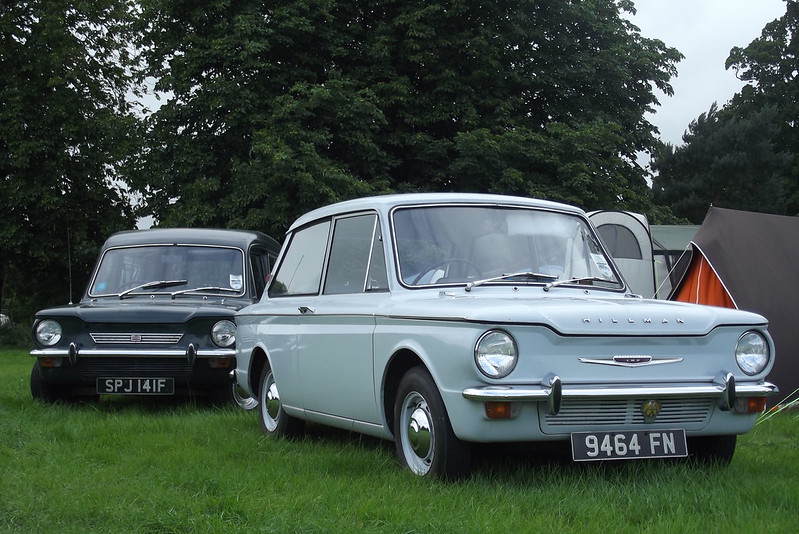 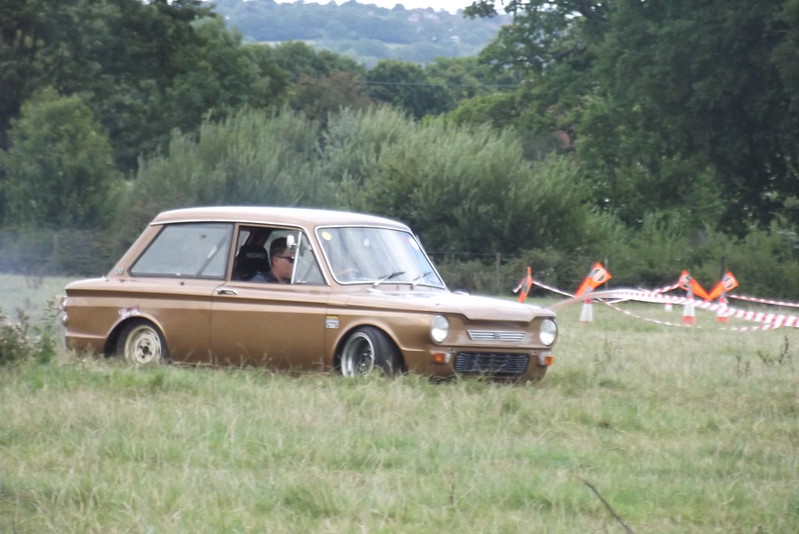 Just to add my thanks to the organising team for a great National weekend. Stevie and I had a great time, the venue was very picturesque and even my 1050 mile round trip passed without any problems other than a blown fuse! Not bad considering the Paradiso was in tow!
next stop, the Wicked Welsh, see you there

Cheers Jim
If it ain't broke, you've not fiddled with it hard enough!!!
Top

A belated and sincere thank you to Colin, Jill and and Team from all on the S/E Essex area. Just a shame we couldn't have done the whole 4 days, but a very enjoyable week end never the less and a great setting. Thanks again. Trevor
Top

A slightly late request, but does anyone have some pictures of the line up of fancy dress in the marquee?
In particular looking for one of dad taking his lap of honor in the marquee in his "Purple Plain (plane!) mobility chair

I seem to remember someone taking pictures at the time.
Cheers
Graham

Graham Cashmore
Heathrow ACO
Yes, I have still got my red Stiletto
No, I haven't finished it yet
July 2014: It's MOT'd, Taxed & Insured!
Top